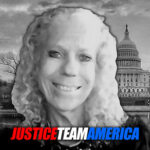 The work and articles by author, activist and court victim Janet C. Phelan

Public Officials: How to Hide Evidence That You Are Being Bribed