Home » Basic Pages » What’s it going to take to unite all Court Victims? One day at a time, one abuse at a time

What’s it going to take to unite all Court Victims? One day at a time, one abuse at a time 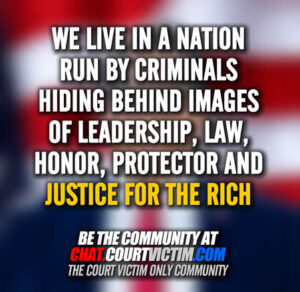 What’s it going to take? They used to say, “Build it, and they will come”. This is a community that is run by its vetted and accepted members because like the image says we live in a nation of frauds. Run by frauds and controlled by frauds. The old “Wolves in Sheep’s clothing” is really used as well is “Don’t like the message, kill the messenger.” For centuries, these old sayings have been used and still are today, probably taught and instilled at major law schools and where our corporate leaders are taught.

Welcome to a community of trust, support, and networking are the goal, not censorship, legal firm or pharmaceutical corporation ads or election fraud. Where the users decide on what is found in Google searches.

Offshore hosted and protected from shady US courts and laws, free from censorship. Come join us as we start building what should have been done decades ago, but no one else would do it. Join real victims like Dr. Richard I. Fine who really understands the root of the problem.

See this page for how to sign up and what’s required, We need admins for each state and division of the courts.

The benefits are many:
Create and post it here once with search engine placement to be found by other victims worldwide.
With options and automation where that one posting is then shared with other social media platforms.
Without the concern of censorship by evil which runs our government, courts, and law enforcement.

Share as much of as little. Find other victims in the ultimate directory of victims and abusers. Yes, it’s key to list your abusers because that’s what other victims search by. To warn the public of what could be in store for them. To share what you did which might help someone who is about to go the same route you did.

This will never be a dictatorship like Facebook where the CEO is the most hated man in the world and for good reason. We’ll never sell your data or put money over the goal of all victims, “our valued users”.

We’ll keep on building and gaining search engine ratings via what has been going on since 2008
Uglyjudge.com What started it all and what we all should have done to expose Judicial Corruption
Courtvictim.com Growing Directory of Court Victims and Abusers (why aren’t you listed yet?)
Cleancourts.org National Court Victim Database (Why did it take so long to do this?) Thank you, Sherry Lund
Chat.courtvictim.com The Original Court Victim Social Media Platform, Private messaging, Discussion forums and Groups
Jail4.Uglyjudge.com Hardcore Directory of Ugly Dishonorable Judges and working towards Jail and prosecution of them. The real solution to Judicial abuse.

We strive to vet everyone who takes part because there are frauds among us. The first rule as we get started will always be. Zero tolerance for disrespect for each other. This is a community number one, built by us, run by us and voted by us.

A big thank-you goes to our host and fellow Court Victim Deborah A. Bujdos. 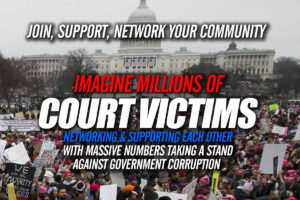